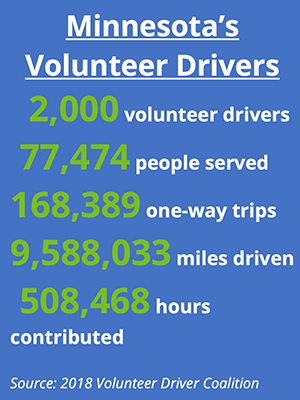 State Sen. Jeff Howe and Sherry Munyon, president of Capital Access Inc., encouraged supporters of volunteer drivers and the 80,000 Minnesotans they serve each year to advocate for two bills that were introduced in early in the year.

The efforts of Howe and advocates of the legislation helped lead to the passing of a bill that clearly defined a volunteer driver in law as “not-for-hire,” and another bill that created a state income tax subtraction for volunteer drivers to reduce their tax liability in Minnesota.

The estimated $30,000 cost of the state income tax subtraction is well recouped by the impact of volunteer drivers, says Dawn Simonson, executive director of
Trellis, formerly the Metropolitan Area Agency on Aging.

“We can serve many thousands of adults and get them to health care and keep them in their homes for about $30,000 a year,” she says. By contrast, assisted living for an individual costs about $48,000 a year, and nursing home care averages $90,000 a year.

“Volunteer driver programs are not only essential to people and their well-being,” Simonson adds, “they are an essential part of our public policy and the way that we work as a state to curb the cost of our growing budget devoted to long-term care services.”

While the new legislation helps, more policy work remains to change mileage reimbursement rates from 14 cents per mile closer to a rate that reflects the actual cost of owning and driving a personal vehicle for charitable purposes. In addition, legislation is needed to protect volunteer drivers from increased insurance rates and to cap the liability of nonprofit organizations that offer volunteer driver services at $1.5 million.